This article, The Lookout Crew, is a Role-Play article. 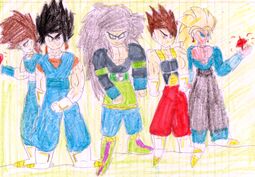 The Lookout Crew were once the ultimate warriors and leaders of the universe, sworn to protect it at all costs whereby their life, honor, and legacy depended on it. In the many years after the Z-Fighters passed on, there was a great need for a new group to take the reigns--leaving the Lookout Crew to take the place as the ultimate protectors of existence.

Formed as a conglomeration of some of the most powerful beings and warriors ever, all from diverse backgrounds or bloodlines of either historic legacy or brute honor, the Lookout Crew quickly laid down their name as something to be feared. With every battle they fought, they grew stronger, but as did every villain that dared to threaten the universe. It all began as a small group just 250 years following Omega Shenron's defeat, on May 8th 1040. From then, it would grow stronger in strength and number. As one died, another would take their place, but they were all irreplaceable. Each had their own unique skillset and method. It became generational when their children and grandchildren also joined the fight later on. It became divine when many reached godhood. The crew lasted for nearly a century, facing many of the most powerful threats to ever face existence (including themselves at times) and achieving greatness that will likely never be paralleled.

The final struggle for both the Lookout Crew and everyone in existence came with the Great Universal Revolution in 1125. The ultimate final test. Proving victorious, the crew defeated Ninthalor, founded a new multiverse, established their permanent legacy, and witnessed the second multiversal reboot. This served as the catalyst that ended the Lookout Crew's reign. They would be later succeeded by the Neo Lookout Crew.

The Lookout Crew's entire timeline can be seen here.

Universe 7 was without any significant protection in the centuries as the Z-Fighters passed on. Goku Jr. would become a great influence that ushered much of the cosmos into a whole new age of modernism and thought. As the dawn of the Age 1000s approached, tensions began boiling as new threats began popping up rapidly.

Just in time, in the spring of 1040, a group of warriors from very different backgrounds, met on Kami's Lookout on Earth. They realized their contrasting styles and methods, deciding to use them together in a fighting group that would ultimately protect the universe. Over the course of the next 85 years, long and full of many struggles and adventures, crew members came and went, and they became increasingly stronger and stronger. They gained free access to Other World due to needing it so much. Many of them ascended to Godhood. The crew became a very dominant, influential, and prominent figure across not only the universe, but the entire multiverse as well. After playing a key role in the Great Universal Revolution in Age 1125, they disbanded as a group and went on their own paths, as individuals, but their legacy would live on..

The Lookout Crew were responsible for kickstarting a cultural phenomenon, drawn upon by martial art schools, food, statues, games, and films. Many stars and planets are named for members of the group. The diverse values of everything they stood for represented a legacy of heroism, strength, prowess and historic remarkability. They inspired all future generations with a legacy that would last as long as existence itself does.

The Supreme Super Saiyan Nikad I

Retrieved from "https://lookout.fandom.com/wiki/The_Lookout_Crew?oldid=217926"
Community content is available under CC-BY-SA unless otherwise noted.